May Day Berlin brings about another tradition for Berliners. In this article we take a look at the good and bad behind May Day Berlin.

May Day Berlin is not your average start to any month. On this public holiday Berliners flock to the neighbourhood of Kreuzberg to be involved in labour day demonstrations.

Originally started & organised by Autonome, alternative people and socialists as a street festival. Kreuzberg was the neighbourhood of choice and the centre of Berlin squatting and punk movement, specifically District SO 36.

Things came to a head however on 1 May, 1987, when intense fighting broke out between the new leftist group and the Police. This began a 3-day on-street contest, with many people coming to Kreuzberg to support the leftists. The group used construction cars and parked vehicles to set-up barricades around every corner of Oranienstrasse. The vehicles were then set on fire and stones were pelted at Police if they tried to attack. The siege ended on 3 May with 100 people injured and 47 people arrested.

Every year since there have been large demonstrations in Kreuzberg with many fights breaking out between police and extreme-left groups.

As the years pass and the area becomes more gentrified, the violence has subsided. Thousands of people take to Görlitzer Park sharing in the festivities. DJs play in all corners of the park while further along the Landswehrkanal the beautiful flowering Dogwood tree encompasses passers-by with its delicate pink petals. Here families, couples and singles enjoy further funky live DJ sets, while hitting up outdoor table tennis or spinning down the big silver slide.

As sunset falls, the party continues to the nearby Skarlitzer Strasse. Eateries cook up a storm on their shop front and bars provide further DJ acts which plunge onto the main street. The sight is a main road filled with people dancing and singing in peace.

May Day in Berlin is one day that must be experienced. Like us on Facebook or book a tour here to learn more about the fantastic city of Berlin and it’s culture. 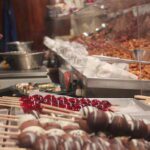